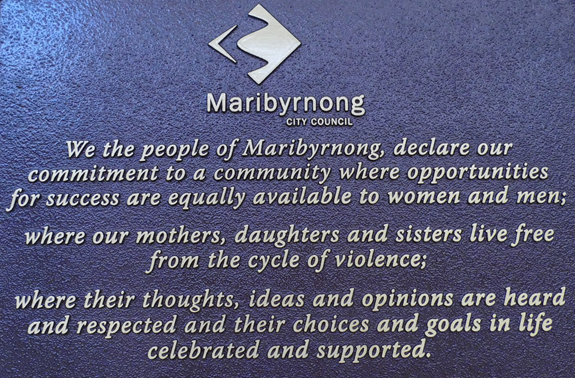 In Maribyrnong, the “thoughts, ideas and opinions” of “mothers, daughters and sisters” are “heard and respected”. My thoughts, ideas and opinions got me arrested by the police. Is this misandry? Why wasn’t my goal of a better relationship with Indonesia which I have worked towards in unique ways for 3 decades “celebrated and supported” as opposed to what happened in 2016?

Thank you for your honesty in acknowledging that the police actions initiated against me from within the ALP and Maribyrnong City Council in 2016 were unnecessary and unfair.

It has broken me to be arrested as a result of trying to talk about ways I wanted to help Australia have a better relationship with Indonesia.

The resulting PTSD leaves me unable to get income and I am resigned to death because fairness for me in modern Australia looks impossible.

While I am still alive, please attempt to publicly address all the following unanswered questions ASAP.

I direct them to you, an elected representative I know, not some bureaucrat incapable of caring about me.

I do this as early in your term as Mayor as I can. My PTSD stopped me writing this last week.

I ask these questions of you because of the human decency which I, as a midwife, believe you may have inherited from your mum, Senator Olive Zakharov.

I sought answers to the first three questions in an open letter published on November 8th 2017. That’s how long it took me to recover enough from the trauma of July 2016 to be able to write publicly about it.

Unanswered questions to Daniel Andrews from the 8th of February, 2018 redirected now to you:

From an email of 5th March 2018, unanswered by the recipients, your predecessor as Mayor and the Maribyrnong CEO.

Democracy, civilised humanity and human rights are life or death for me now.

Your predecessor in 2015, Mayor Nam Quach, wrote that my art: “……. provided a unique expression of Indonesian humanity, history and culture, with the underlying theme of an appreciation for the Indo-Australian relationship. The Bahasa phrases used, referring to ‘kesatuan’ and ‘keragaman’, certainly reflect the strength and unity found within diversity, striking a chord to the spirit and values we share here in the City of Maribyrnong.”

As a fellow independent artist, Martin, you have made a good little contribution to 3 of my 5 art displays at places important to 4 heads of government in Indonesia, art displays where shared Austral-Indonesian history, democracy and human rights were and are vital themes.

Now, instead of us working together for Australia for those values through art, the above questions arising for me from undemocratic Maribyrnong human rights violations from within the ALP against me, must be addressed.

Written and authorized by Geoff Fox, Maribyrnong, if that’s what’s necessary this week. 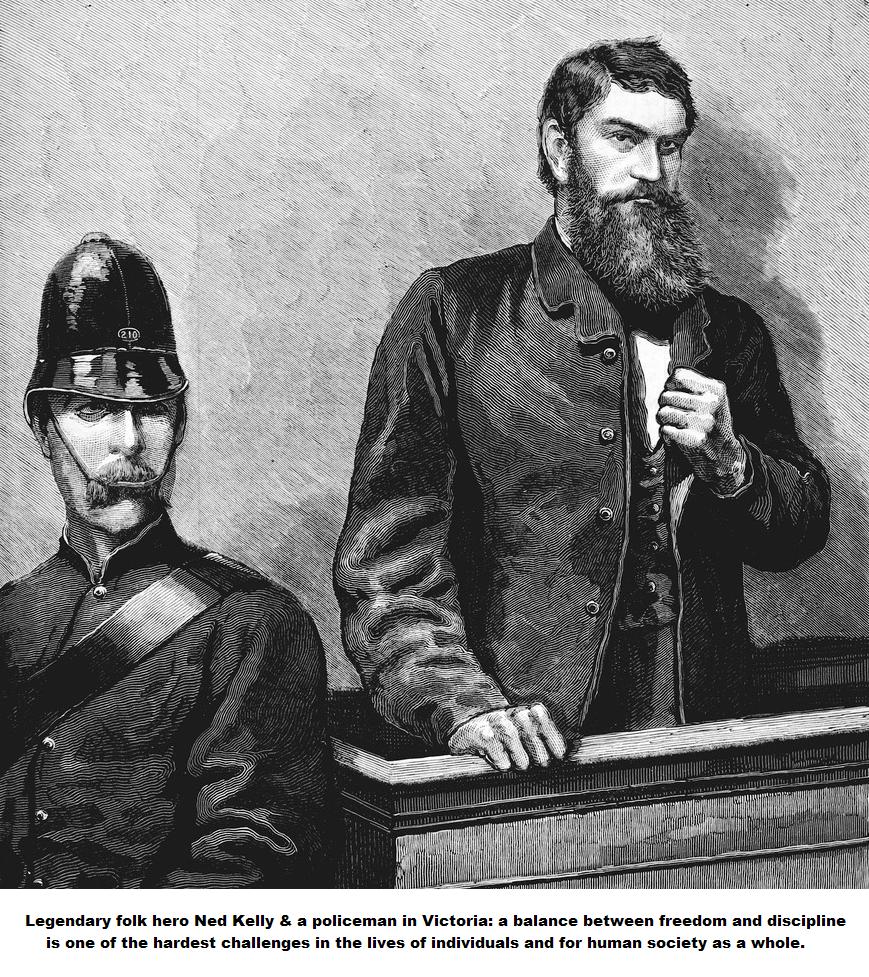 Injustices against men have lead social commentator Bettina Arndt to describe the State of Victoria as Australia’s “Deep South”.

With this letter, I now call upon you to address the misuse of police services against me and to commit your government to better protection of human rights especially the need for freedom of speech in democracy.

On July 5th 2016, the police force which answers to and is directed by your government arrested me for communicating with an elected representative of the Australian Labor Party, Councillor Sarah Carter of Maribyrnong City Council.

On June 18, I had warned that councillor by email that I would renew and extend an unresolved written complaint about her unless she discussed and resolved my concerns about her conduct. Two days later on June 20, police were ready to arrest me. But I wasn’t at home that day. I phoned the police station twice within twenty four hours in response to the calling card left by Senior Seargeant SW, but nobody returned my calls. On July 5th I was arrested for the alleged crime of sending too many emails and text messages to Sarah Carter via the communication channels made available to the public via the Maribyrnong City Council website. The Senior Seargeant later told me that the grounds for the arrest were events prior to June 20.

I believe this arrest was both illegal victimisation and a violation of various sections of the Victorian Charter Of Human Rights and Responsibilties including sections 15 and 18, relating to freedom of speech and the right to participate in public life.

In communicating with Sarah Carter, I started out wanting to commemorate the momentous achievements against fascism of the victorious allies in World War Two and to promote friendliness with Australia’s giant neighbour the Republic Of Indonesia.

My patriotism was rewarded with my arrest.

Under your government, Daniel Andrews.

Shortly after the arrest, I went back to the police station to try to tell the police that I believed they had violated my human rights. One constable laughed at me and Senior Seargeant SW told me in defence of the police action. “We have all these councillors coming over here about you ……..” I replied with words to the effect that if a number of councillors had come to his police station about me, then Victoria’s police force was at risk of becoming part of a police state. To his credit, the Senior Seargeant was visibly shaken by my words. He is no longer working at Footscray Police Station. I do not know why he left or where he is now.

Subsequently the investigating officer was Senior Constable PM. I told him how profoundly suicidal I had become after the arrest. He told me that officers at Footscray Police Station had been under instructions “from head office” which lead to the arrest. As a citizen who cares about democracy, I wish I knew what those instructions were.

Daniel Andrews, please ask the Chief Commissioner of Police, Graham Ashton, what sort of instructions lead to the victimization and human rights violations outlined above.  I have written to both you and Graham Ashton numerous times about my trauma and neither of you has begun to address my concerns.

I cant live with that.

Not in the State Of Victoria.

At the age of 60 years, my life as a citizen in your state is in ruins.

In your state, I am at war with the local government in Maribyrnong: that is the psychological truth of my life.

This war was started from within that local government when police services were misused to protect an elected representative of the ALP from communicating with me.

Will you, Daniel Andrews, and Graham Ashton, ever start to take your responsibilities and Labor Party Human Rights legislation seriously?

I believe the White Ribbon Day campaign demonises men and helped to create a climate where a feminist driven panopticon made my determined patriotic lobbying a crime. Will you repudiate this demonization of men and unequivocally support gender equality for men?

Now I have almost no income as I focus over and over on trying to understand why an apparently decent police officer like SW, who I believe does or did his best to serve and protect the Victorian community, came to be involved, during the lead-up to an election, in the denial of basic human rights essential to democracy.

In an open letter made public on November 8, 2017 and addressed to Sarah Carter, I asked her some hard questions:

I wanted to know what she had to say for herself with respect to the use of the police services to “protect” her from my lobbying when she was facing an election.

I wanted to know, and still want to know, what are the implications for democracy when an elected representative can be up for reelection and facing the possibility of a formal complaint from a citizen voting in that round of elections and then Personal Safety laws are used by the police to make that voter liable for two years jail if he mentions the candidate online or contacts her.

I asked, “How did Personal Safety legislation and police intervention come to be a substitute for a complaints process at local government level?”

These questions remain unanswered by Sarah Carter, who is your party colleague, Daniel Andrews.

A different question, which has been answered, is a question asked online about your government by Andrew Bolt on October 14th 2016: under the heading: “Victorian Government to brainwash students on male “privilege”, Mr Bolt wrote:

“Victorian students will be taught about “male privilege” and how “masculinity” encourages “control and dominance” over women, as part of a mandatory new school subject aimed at combating family violence. The Victorian government will push ahead with the rollout of its $21.8 million respectful relationships education program, despite claims the program fails to consider the multiple and complex drivers of family violence, ignores male victims and amounts to the brainwashing of children. Evidence has emerged the program risks alienating men — by presenting all men as “bad” and all women as “victims” — a point highlighted in a report evaluating a pilot of the program in 19 schools last year.

The sheer impertinence of Labor politicians and Leftist bureaucrats to think they have a right to impose their ideology onto the children of others, including the children of the parents who definitely disagree with their toxic ideology.

What kind of person thinks they can misuse power like this?”

A powerful answer to this question comes from Professor Janice Fiamengo of Canada. She writes:

“These people believe, as do all revolutionaries in the causes of so-called “social justice”, that the end justifies the means. If one woman might be saved from harassment or abuse, any number of potential male abusers can and should be sacrificed. In third wave feminist ideology, men are collectively guilty and are not deserving of compassion or fairness; women are collectively innocent and must be ‘protected’ by any means necessary. This modern revolution threatens everybody else’s basic rights.”

Professor Fiamengo has this piece of advice for government leaders, Premier Andrews:

“Anyone who makes rules for people to live under should read Charles Dickens’ novel “A Tale Of Two Cities” in which possession by a radical ideology undermined rational thought and fair dealing.”

The Professor made this comment to me on the significance of what happened to me in July 2016: “……. in your case and in many others that are now occurring as a result of feminist lobbying and propaganda, the response of authorities is an “over-reaction.” You did not threaten the woman in question. There was nothing in your correspondence with her that warranted your being treated by the police as a danger.”

Premier Andrews, you have boasted that Victoria is the most “progressive” state in Australia. Is police protection of an ALP candidate from showing respect for patriotic lobbying what you mean by progress?

“Utopian social experiments are not new. The story can end like the Reign of Terror in “A Tale of Two Cities” and can begin like our modern demonisation of men and feminist promotion of  victimhood for women.  In order to purge dissident opinion, punishments must be created for those who disagree. As time progresses, more and more people must be put in the real or metaphorical gulag until that ever growing prison is far larger than the tiny utopia. The agitators always find new reasons to conduct further purges.

So, in Maribyrnong, to protect local government’s “gender equity ambassador” from the emails and text messagess of a male midwife who wanted to plant memorial trees on vacant military heritage land in the community, Victoria Police arrested the man. And this is going on now all around us, in every major institution of western societies. And it will go on for a long while as totalitarian practices replace the long evolved and evolving traditions of Western democracies.”

Daniel Andrews, the trauma of being arrested at the age of 59 with no previous criminal record has left me battling PTSD.

What the police force can be used to do in your Victoria scares me.

It is not the democracy I once had faith in.